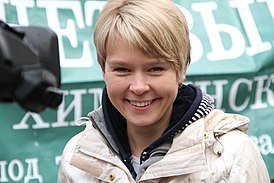 Yevgeniya Chirikova is a Russian environmental activist, primarily known for opposing the building of a motorway through Khimki forest near Moscow. Also played a prominent role in the 2011–2012 Russian protests following disputed parliamentary elections in Russia. She is currently based in Estonia.

2007 - 2014
Environmentalist, activist
Leader of the Movement to Defend Khimki Forest.  Due to the protest activity, the most of the forest near Moscow was spared from commercial development, though the toll motorway was still built through the forest. Together with Russian rock star Yuriy Shevchuk, organized a 5,000 - strong rally in Moscow to protect the forest. It turned to be the first event in the chain of mass protests in Moscow 2010 - 2012.

2013 - Winner of James Lawson Award as “an organizer or activist who demonstrates strategic insight and creativity in waging nonviolent struggle”,winner of Gront Internationellt pris (Sweden)
2012 - Winner of the Goldman Environmental Prize
2011  -  Got the Woman of Courage Award from US Vice President Joe Biden.
In November 2012, Foreign Policy named Yevgeniya Chirikova one of its 2012 Top 100 Global Thinkers.